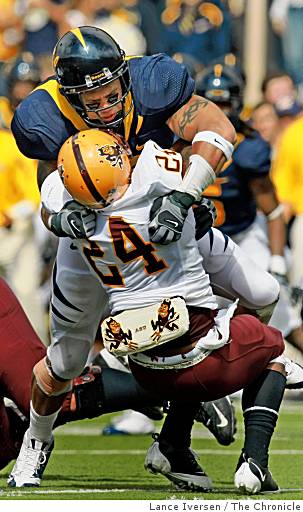 (1) Lots of playaction.  I'm not sure how many times we did it, but it seemed like Cignetti called up playactions at least 5-6 times in the first quarter alone.  I like it.  Unfortunately, ASU was playing good assignment football and kept going after Longshore instead of the runningback.  Longshore did a great job dumping off those balls to avoid the sacks.

(2) Lots of passing early on.  If I had to estimate, I think Cal's gameplan was to pass early and often.  Perhaps as much as 75% of the time.  It seemed like the usual "establish the run" offense turned into the "establish the pass" offense.  Perhaps this is one of the reasons why Tedford and Cignetti tapped Longshore to start - he has tons of experience, he has better knowledge of the offense and defenses.

(3) Great defensive gameplan.  Gregory had a very nice gameplan today.  What was that gameplan?  Take away the deep ball with zones and 7 man coverages.  I was by a bunch of guys who complained the entire game about "soft coverage."  Little did they realize the same "soft coverage" they hated won the game.  By taking away the deep balls, it forced Carpenter to take those short little 5 yard outs (which the guys next to me still complained about with loud "FUCKING SYD" groans when Carpenter would check down to short routes against Syd).  By taking away the deep balls, it also forced Carpenter to hold onto the ball for a long time which resulted in some great coverage sacks.  Carpenter CLEARLY was frustrated and injured by the 3rd and 4th quarter.

(4) Great individual effort by the pass rushers.  Whether it was DL or Follett, those guys were all over Carpenter.  As CBKWit already noted, Cameron Jordan had a beastly game.

(5) Vereen had a decent game.  The OL never really opened up a huge gaping hole for a 40+ yard run but he took what daylight they gave him.

(6) Speaking of the OL, pretty solid pass protection and solid rushing.  Neither was spectacular, but they weren't bad either.  A good solid all around effort and performance in my opinion. 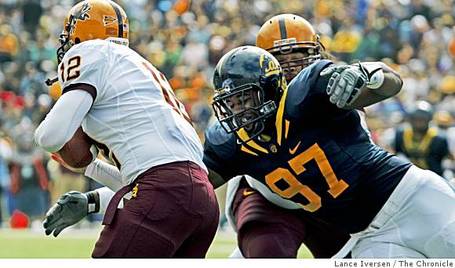 (7) Great game by the DBs.  Sean Cattouse had a fantastic INT, and TD-breakup.  Hagan had a phenomenal game.  Syd played very well.  I heard a lot of Cal students complaining about Syd today but I think he played without significant errors.  The students around me who disliked Syd seemed to be finding complaint in the fact Carpenter was consistently taking little 5-7 yard outs on Syd.

Well, there are two things to note here.  First, Cal played a lot of zone coverages and thus Syd isn't in man coverage and draped all over the WRs.  Thus, fans should be aware that just because Syd may have been off the WR that it isn't a blown coverage.  Second, Syd is defending the inside of the field.  CBs almost always are going to defend the inside of the field and give up passes to the outside.  Why?  If WRs get to the interior of the field, that's often bad.  That's where huge passes occur.  To wit: Carpenter's TD pass to the WR on a slant (or post, I can't remember) over the middle of the field.  On the other hand, passes to the outside are limited because the sidelines act as a barrier, and it's a much harder throw to the sidelines.  Also, 5-7 yard outs are much better than 20 yard receptions and 40 yard TDs.

(8) Longshore was decent.  Love him or hate him, he did alright.  He wasn't great.  He completely didn't see Tad Smith in the endzone on the first drive.  He had some overthrown passes on the first drive and slightly off-target passes scattered throughout the rest of the game.  But on the other hand, he wasn't bad either.  He had some great TD throws, and great short completions too.  The INT was questionable.  Certainly, if Longshore saw beforehand that Vereen wasn't there, Longshore probably should have just thrown the ball into the ground, or taken a sack.  But it's possible Longshore was expecting Vereen to get there and Vereen didn't quite get there.  On the replay screen after the INT, Longshore and Vereen were having an animated discussion about that play.  It looked like perhaps Longshore was expecting Vereen to be there but Vereen wasn't.  A few friends of mine say that Vereen got blocked off by a defender or something.  I guess this is something to look for when I re-watch the game.

Did Longshore do enough to secure the starting spot for next week?  Definitely not.  But he certainly has made the decision even tougher for Tedford and Cignetti. 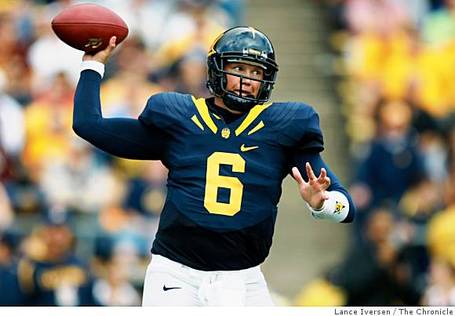 Let's not let the QB controversy sour the victory.  Let's just enjoy the victory.  Our D played great.  We have two capable QBs.  We're 4-1.  Nobody got injured today.  Be happy.