First of all, I was wrong. About the Lipizzaner Stallions, they are from Spain, not from Portugal (ROLL TIDE). Also, about the point spread. Clearly, Cal -8 to 10 was the correct line, not Cal -5 as I would have pegged it. Avinash, to the victor go the spoils. For your reward, you may now have sex TwistNHook.

The biggest surprise to me, and the difference between a Cal victory of 7-14 points and a Cal victory of 3-6 points, was the defense. Our offense performed pretty much as I expected, but our defense dominated a major opponent like I haven't seen in a while. Here's what I saw: 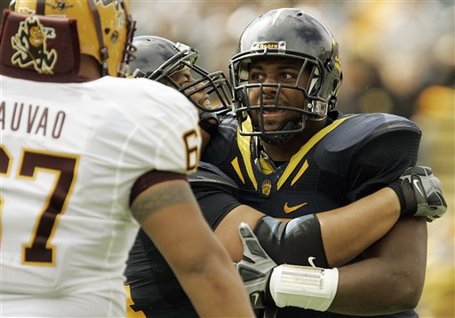 1) Our opening drive was exceptional. We have struggled in this area for a while, dating back to at least 2006. I can remember a number of 3 and outs followed by long TD drives by the opposition to open games, but not much of the opposite. I don't believe we had a third down until we were at the 4 yard line, and while it was disappointing not to score a touchdown, I felt this drive put ASU on the defensive, and it gave us a lead we would not relinquish.

2) Our goal line woes continue. I thought we should have rammed it down their throat from the 4, but we ended up with 3 incomplete passes. Of course, last year we ran it right up the middle all the time for limited success, so I think I'm just using hindsight to criticize obvious failures. And as the game wore on, it was increasing clear that our offensive line was not doing a great job opening holes for Vereen. Still, I thought we had ASU on their heels on the first drive, and I felt we let them off the hook by being too cute.

3) The passing game still isn't clicking. Like Riley, Nate missed a number of receivers. Unlike Riley, he threw a horrible interception. When we needed third down conversions during the fourth quarter, he threw too far in front of Morrah on an out and too short of Calvin on a fly down the sideline. I slightly favor Riley over Longshore at this point, because Riley does a better job of limiting turnovers than Nate (especially impressive considering Longshore's experience), but I think Jonathan Okanes has it right that neither QB has separated himself.

4) Our secondary...wow. When Tedford told us this spring that he had been trying to hire new DB coach Al Simmons for a while, I was excited. Good hire, coach. Syd made great strides towards the end of last season, but I don't know if I expected him to be THIS good. He seems to make a play on every ball that comes his way; it's gotten to the point where I'm surprised when he doesn't break up the pass. Meanwhile, Darian Hagan came in very highly touted but had done nothing until this fall; suddenly, he is making plays on the ball that Syd didn't make until last year and is obviously a natural in run support and open field tackling. Add in Sean Cattouse coming up with a pick and a critical pass break up in the back of the endzone and this unit might be even better than the 2006 Daymeion Hughes secondary. 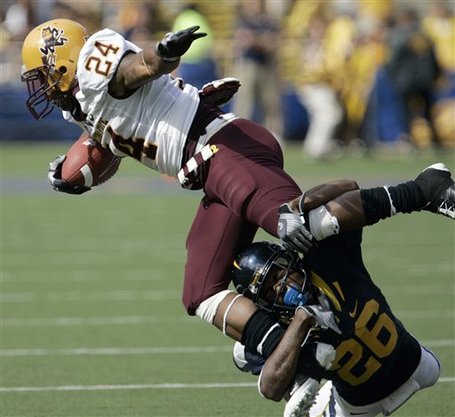 5) The Chris Conte interception deserves its own bullet point; other players may have had better games (Cameron Jordan, I'll get to you), but his pick in the 3rd quarter was the play of the game. Our offense did NOTHING in the second half, save for a touchdown drive immediately following Conte's pick. That put us back up by 17, and while we may not have needed it in the long run, it sure made our lead much more secure. Conte has vacillated between average and bad this year, but that pick was a great play at a critical time.

6) Bryan Anger. He had two pretty bad punts in the second half which allowed for big returns and good field position by ASU, but that 71 yard punt was unbelievable, even for him. It effectively clinched the game for Cal. Twist asked me if a punter had ever declared early for the draft; let's hope he's not the first.

7) On the subject of field position, our kickoffs were much better. I won't say they were good, as most were pretty low and I don't think any approached the 5 yard line, but compared to kicks landing at the 20 or out of bounds, they were great. Our kick coverage was also much better, and the result was ASU starting around the 20, not the 40.

8) Our offensive line needs work. Losing Guarnero hurts, especially because Malele hasn't done much at the other guard postion (he was absolutely destroyed on a 1st down run in the 4th quarter). He and Teofilo especially need to assert themselves.

9) Our linebackers can hit. I can remember at least one big hit by each of our four starters; Worrell destroying a receiver over the middle to end the first half, Eddie Young body slamming (I think) someone on the outside, Felder eating up an inside run, and Follett doing his best reenactment of his hit on Ainge to cause a fumble in the 4th.

10) Finally, I'd give the game ball to Cameron Jordan. He sacked Carpenter on ASU's first series. I can't count the number of times I turned to the people next to me saying "he's REALLY fast". The defense was out there for most of the second half, but I didn't feel like our depth at DE was challenged. For him to step in for a vocal senior leader like Rulon and play at the level he did, for the entire game, is phenomenal.

What did you think? I was encouraged, but I think we'll need Jahvid Best and an improved passing game to beat Arizona. Jahvid, get healthy, and GO BEARS.