Did Cal Run Up The Score On UCLA?

Share All sharing options for: Did Cal Run Up The Score On UCLA?

I've always seen Jeff Tedford as a classy guy. A guy with an insatiable desire to win, but the discipline to win "the right way". A guy who, with Cal in the running for a Rose Bowl berth in 2004, though the Bears had their final game at Southern Miss well in hand but needed style points to win over voters, decided to take a knee at the end of the game rather than try and score a meaningless touchdown. A guy who publicly chewed out his own players for scoring a garbage-time touchdown in a blowout over Texas A&M in the 2006 Holiday Bowl. Jeff Tedford has never struck me as the sort of coach who would try and run up the score on anybody, which is why the ending of Saturday's 41-20 win over UCLA struck me as rather odd.

The game had been close for most of the afternoon, but once Mike Mohamed returned another Kevin Craft interception for a touchdown to put the Bears up 34-13 with nine and a half minutes left, I was finally able to relax a little. Cal got the ball back after forcing a Bruin 3-and-out, and I honestly expected Cal to start up the 'run up the middle 3 times and punt' offense. As a football fan, I hate watching that offense, but I do understand it's purpose: shorten the game as much as possible while taking as few risks as you can. The Bears should have been able to grind the game out on the ground, and if they could kill 5 or 6 minutes off the clock with a long drive, the game would have been essentially over.

End-of-blowout situations can be tricky, especially when you get down in the red zone. You want to ease up on the team that's down, but you don't want to take it so easy that a) the team gets back in the game, or b) it looks like you're taking a pity dive. Also, you can take your best players out, but you can't tell the players who do play to do anything but try their hardest. If we're running it up the guy and you can't stop up, well, that's not our fault, is it? Still, you can certainly dial down the aggressiveness of the play-calling, and I, for one, was surprised to see Tedford and Cignetti not do that.

On their next possession, Cal probably surprised a lot of people by coming out running basically their regular offense. Yes, they ran first, at least until getting into 2nd- or 3rd-and-long situations, but these weren't all runs up the middle. Best's first two carries, in fact, were outside runs that both went out-of-bounds. What happened to trying to kill the clock? And on 3rd-and-9 on UCLA's 45 yard line, the Bears didn't just try and pick up the first down to maintain possession; no, they went for it all, and would have gotten a touchdown had Kevin Riley been able to connect with Jeremy Ross deep down the right side.

Then, after forcing another UCLA 3-and-out, I really thought the Bears would get conservative. And indeed, the Bears' starting tailback, Jahvid Best, never saw the field again, and his backup, Shane Vereen, got 3 straight carries up the middle. However, instead if simply eating the clock, one of those runs popped for 56 yards to put the Bears down inside the 10 and in position to score again. With 2 minutes left in the game, there's no reason not to keep running the ball, and if you don't score, no one will blame you for kicking a field goal or whatever. However, for whatever reason, the Bears decided to start passing again, and Kevin Riley found Cameron Morrah in the end zone for a touchdown.

I don't know about you, but passing for a touchdown while up three touchdowns with fewer than two minutes to play sure feels like running up the score to me. 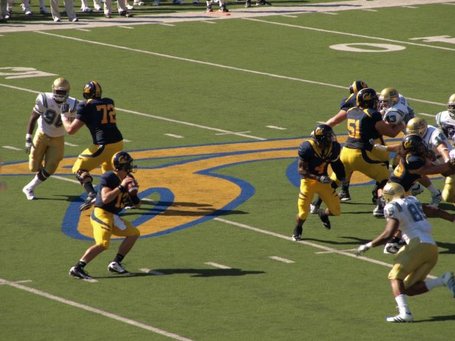 Why is our starting quarterback throwing passes late in the 4th quarter when the Bears are up by 3 TDs? - Image via TrisWeb

Of course, to everyone who thought the game was over and there was no reason to score, the Bruins provided a swift counterargument, returning the ensuing kickoff 82 yards to the Cal 9 yard line, scoring two plays later to get the touchdown back, taking just 20 seconds off the clock. Had the Bruins recovered their subsequent onside kick, they might have had a shot at making a game of it. OK, probably not, but still, letting up on a team you think is beaten can occasionally be a costly mistake.

As a fan in the stands, the Bears' final touchdown felt a bit like running up the score, but my gut says Jeff Tedford wouldn't do that. So was something else going on there? Two possibilities come to mind:

1) Tedford wasn't convinced that the game was out of reach, and he was trying to ice the game once and for all. After all, though he no longer ran Best out there on that final scoring drive, many of the Bears' starters were still in the game, including QB Kevin Riley and the man who caught the touchdown, Cameron Morrah.

This reasoning, however, feels weak to me. Perhaps an argument could have been made for the deep bomb to Ross on the previous drive, with about 5 minutes left to play, but up 3 TDs with under 2 to go? A couple of runs up the middle should have been sufficient. Even if you run three times and don't score at all, you've taken time off the clock and pinned the Bruins inside their own 10.

2) Tedford was still trying to get work in for his offense. This actually feels like the right answer for me. Why were the starters still in the game with the outcome essentially decided? Perhaps because those starters still needed plenty of work.

Remember, at this point in the game, though the Bears had scored 34 points, 14 of those were off interceptions returned for touchdowns. Entering the final scoring drive, Kevin Riley was 10 for 21 passing for 143 yards and a touchdown, with more than a third of those yards coming on the flea-flicker to Nyan Boateng; those are the kind of numbers that 'pedestrian' and 'mediocre' were invented for. The Bears had punted 7 times already, and on 4 of those drives, the offense actually lost yardage. Moreover, this drive was only the second of the game in which the Bears ran an offensive play inside the red zone; on their opening possession of the game, the Bears ran 6 plays inside the 20, 3 of them inside the 10, and came away with a disappointing field goal. Yes, the game was a blowout at this point, but it was pretty clear that the Bears' offense still needed the work, and to be fair, I don't think you could say that UCLA's defense didn't need the reps as well. 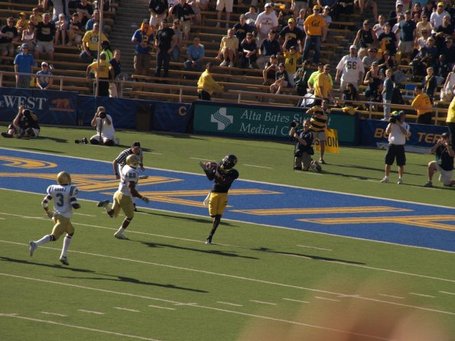 You're looking at a third of Kevin Riley's passing yards versus UCLA. - Image via TrisWeb

Of course, I'm just speculating here; I don't get the kind of press access where I could ask Tedford why the Bears were still trying to score so late in the game. However, if I'm correct and Cal was simply taking the opportunity to continue to work on their offense, that's a decision I can wholeheartedly agree with. Strange as it sounds, with the season more than half over in a game in which the Bears dropped 41 points on the Bruins, Cal's offense can still use all the work it can get, and sending in the scrubs would have been to waste a perfectly good practice opportunity against live, Pac-10 competition.

Although I was puzzled at the time, I'm now pretty convinced that the Bears had no intention of trying to embarass the Bruins. If UCLA wants to use this excuse as extra motivation for next year, I won't hold it against them; a little extra motivation, justified or not, is never a bad thing. But I hope no one points to this game when trying to argue that Tedford is a "no class loser"; what would you have done, lain down and given up? Now *that* would have been insulting.