Share All sharing options for: Looking Back at Arizona State: Pursuit Angles

I wanted to run this analysis piece the week directly after the ASU game.  But unfortunately, TwistNHook was being pretty liberal with the veto-hammer and thus it got put off.  TwistNHook still hasn't given me the green light, but I don't care what he says.  I'm not going to let him oppress the PRileytariat any longer.  Thus, while Twist is sleeping, I'm going to put this story on the front page behind his back.

The CGB has been posting a lot lately.  To not be forgotten are other excellent posts: See Maharg shotgunning a beer; some more photos from the Cal game, and videos of the awesome marching band performance, see my post-game thoughts and overly generous grade to Riley; our discussion of the Top25, and see our once-per-month post by CBKWit.

Since the defense did pretty well against ASU, instead of focusing on what went right, I thought I'd address what went wrong.

The play I want to address is the play where ASU scored on a passing touchdown.  What went wrong on this play?  Let's see... 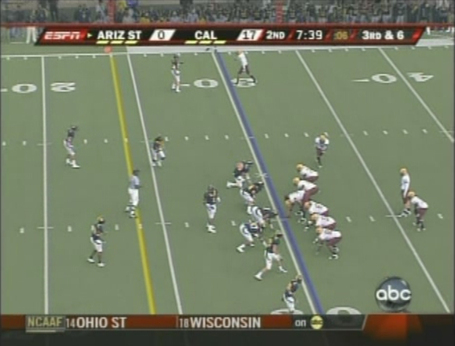 The pre-snap snapshot is above.  ASU has their "11 personnel" package on the field (not 11 people on the field).  Thus, ASU has 3 WRs, 1 TE, and 1 RB on the field.  There is one ASU WR hidden by the "ABC" logo, in case you're wondering where the 3rd WR is located.  ASU's TE is left, thus, the strength of their formation is left, and the ASU RB is on the same side of the TE in the "strong" position.  Note that the ASU FL (flanker) and SE (split end) WRs are split wayyy out wide suggesting pass.  Indeed, if you check the ticker at the top of screen, you'll see the down is 3rd and 6, almost assuredly a pass play.

Cal is defending with their 3-3-5 nickel defense (3 down linemen, 3 linebackers, and 5 DBs).  Note that this is a nickel because there are 5 defensive backs, and not because there are 3 CBs (Syd, Conte, and Hagan).  The determining factor of a nickel defense is not based on how many CBs are on the field, but how many total defensive backs are on the field.  Sometimes, some teams will use 3 safeties and 2 CBs in their nickel instead of 2 safeties and 3 CBs.  Either way is a nickel.

Now, going back to the previous picture, it looks as if Cal is playing man coverage on the WRs, with two deep safeties.  But ASU is going to use some motion to make sure. 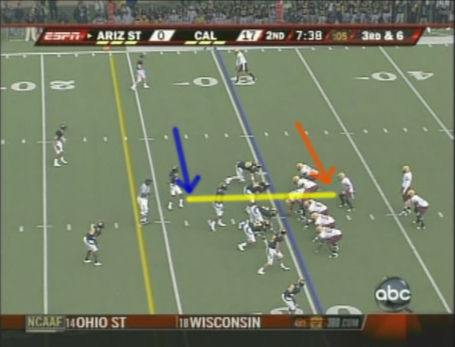 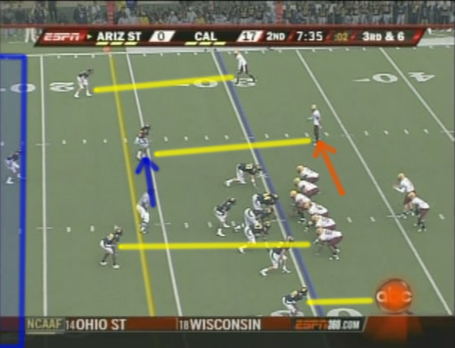 ASU's motion puts the SL WR back into the slot towards the open side of the field.  Syd follows, again reaffirming the notion that Cal is playing man coverage.  Now, at first, it appeared as if Cal was playing two deep safeties, but just prior to the snap (the picture above), Cal's SS (Ezeff) can be seen dropping down into the box - only a merely 7 yards off the LOS - to cover the ASU TE.  So Cal isn't playing with two deep safeties, but with only one deep safety in zone coverage - a Cover 1.  More specifically, this is a man free defense - meaning that the FS is all alone playing deep zone coverage by himself ("center field" if you will, for you baseball nuts), while all the other DBs play man coverage, and LBs are either pass rushing or covering the RB(s).

I've shown the cover 1 zone with the large light blue box in the secondary.  All the other Cal DBs appear to be playing man coverage (shown with yellow lines).  I've put a desert red/orange dot over the ASU FL that is hidden behind the ABC logo so you know he's there. 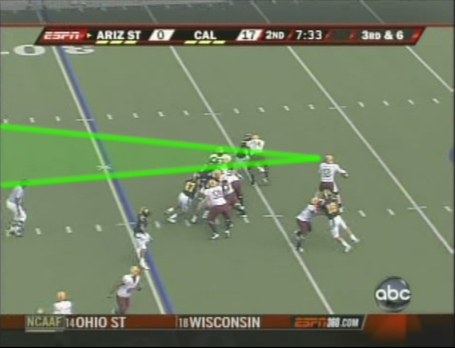 Post snap picture is above.  Carpenter knows exactly where he wants to go with the ball (green vision cone).  He wants to throw to the SL WR matched up against Syd.  Carpenter has a perfect un-impeded window to make the throw too. 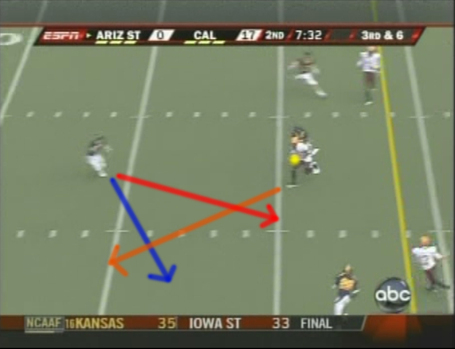 Carpenter makes the throw and the ASU WR makes the catch.  I've highlighted the ball with a yellow dot.  Now, here is where the error on defense occurred.

The perfect pursuit angle is the blue arrow (above).  Cal FS Sean Cattouse, unfortunately, takes a shallow pursuit angle, the red arrow.  Cattouse under-estimates the speed of the ASU WR, and thus puts himself out of position on the play to make the tackle. 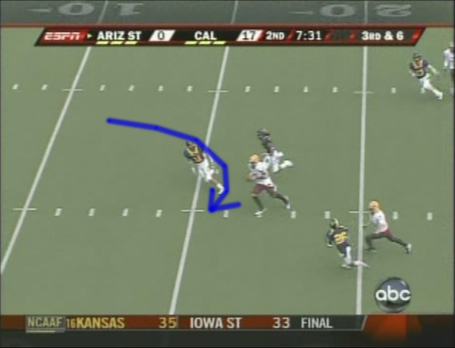 As you can see in the picture above, Cattouse takes a bad angle, then has to adjust/curve his pursuit path to adjust to the WR.  As we all know, the shortest path between two points is a straight line, and not a curved line.  Cattouse's bad pursuit angle has him taking too many steps, puts him out of position and... 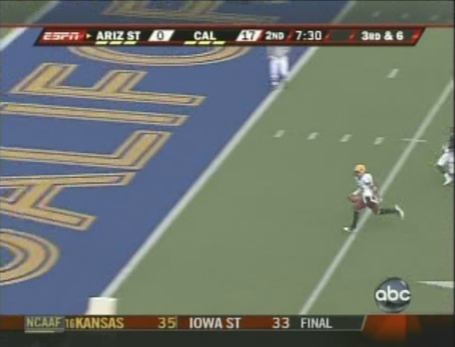 allows for an ASU touchdown.  Had Cattouse taken a wider pursuit angle, and not under-estimated the speed of the ASU WR, Cattouse would have put himself in position to make a touchdown saving tackle. 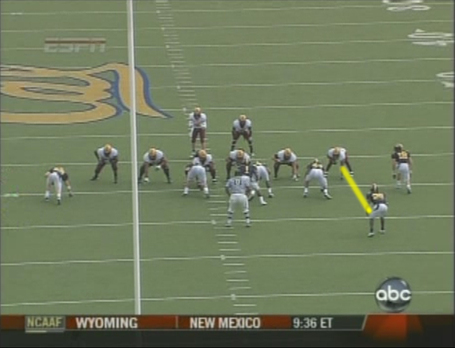 Let's look at the play again from the endzone-cam.  This angle also helps get a better view on the alignment of Cal's DL as well as Cal's OLBs (outside linebackers).  Note that Cal's 3 defensive linemen are playing tight against ASU's center and guards to prevent a possible draw play.  Also note that Cal's OLBs (Follett on the far left in a 3 point stance, and Mohammed on the far right in a two point stance) are playing wide outside the RT and TE respectively suggesting they are pass rushing.

Also, Ezeff dropping down into the box to cover the ASU TE is also more obvious.  I've highlighted Ezeff's man coverage with a yellow line. 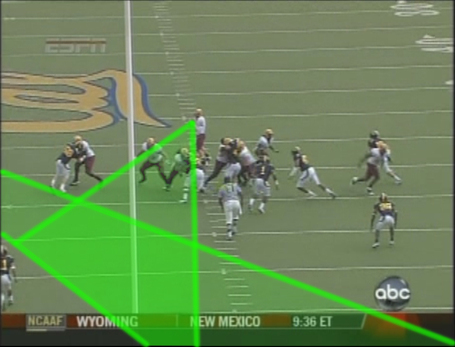 Part of the weakness of man free defense is the fact that there is a lot of open space for WRs to use.  Zone coverages can sort of break up these vast areas.  But with man coverage, it's even more important that the DBs maintain good coverage on their WRs because the only thing that is preventing a touchdown is the DB covering the receiver, and the FS (unless another DB can make the tackle). 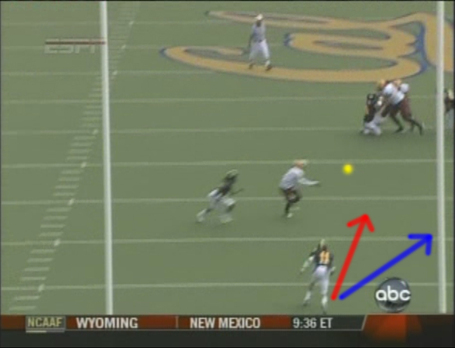 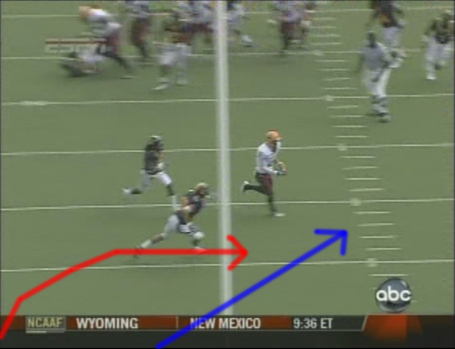 And once more, this picture shows the result of Cattouse's poor pursuit angle with the red curved arrow.  The proper pursuit angle (blue line) would have put Cattouse in perfect position to make the tackle.

Cattouse is a young player and he'll fix these errors as he gets more experienced.  He probably broke more on the ball in this play rather than on the angle of the ASU WR.

So the points to take away from this play are this:

(3) Stepping on the toes of the CB on your cut to get separation.  The ASU WR ran a post route on this play.  He ran his route right at Syd, then made his cut right as he was approaching Syd.  Some WR coaches tell their WRs to imagine themselves stepping on the toes of the CB on the cut to get separation - not literally.  But the point is to run your route right at the CB, and make your cut right in his face to get maximum separation out of the cut.  If you make your cut far from the defender, he has ample space to recover and pursue.  But when you cut right on the defender, he has less space and time to recover and pursue.

(4) Pursuit angles are critical to make a tackle.  If you under-pursue (such as Cattouse did), you'll allow the ball carrier to escape with a straight-ahead speed burst.  If you over-pursue, you'll allow a cutback lane to form.

(5) Blitzing is risky.  The risks of blitzing is that you often have to leave your DBs in man coverage.  Locking down a WR in man coverage is a lot harder than securing your zone in a zone defense.  Plain and simple, man coverages are riskier than zones.  Blitzes have risks.  They are higher risk, and higher rewards.  Depending on the talent of the team, the risks can often far outweigh the rewards.  The decision of whether the team has enough talent to take this risk is up to the defensive coordinator.

On this particular play, Gregory took that risk.  Cal committed 6 defenders to the pass rush and RBs leaving 5 men in coverage to cover 4 receivers.  Cal got burned for a touchdown.  Blitzing can be effective when used properly but by no means it is a complete easy solution to a defense's woes.

(6) Aggressiveness of the CBs can reveal how many safeties are playing deep coverage.  I didn't cover this in the analysis above, but the point is this: when a CB plays aggressive bump and run coverage, you can almost be assured that he's doing so because there is safety help.  The CB knows that he can get away with playing aggressive and risk the WR beating him because he has safety help (typically at least two safeties).  On the other hand, when a CB plays off the WRs and plays conservatively, it's usually because he knows he doesn't have safety help and thus isn't taking a risk of getting beat.  On this particular play, it was obvious that Cal was only playing one deep safety not only because Ezeff dropped down into the box, but because Syd and Conte (on the open side of the field where WRs have an advantage) were playing off the WRs.  Because Syd and and Conte were playing off the WRs, they were being more cautious to not get beat since there was only one safety. Hagan on the short side of the field can get away with playing tighter coverage because he's on the short side of the field and has the sidelines to help him defend the WR.