Post-UCLA Game Thoughts: All About Riley

Share All sharing options for: Post-UCLA Game Thoughts: All About Riley 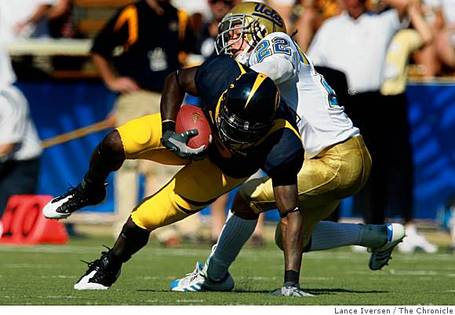 CBKWit did his post game thoughts. And Twist started his usual photo essay. Here are my post-UCLA game thoughts written the night of the game:

If only Riley had played this well all season. Then we wouldn't have had this QB controversy. Fans wouldn't be at each other's throats. CaliSeth wouldn't be on his self-imposed ban from the blog. Olsonist and I wouldn't be arguing left and right (instead, we might even be friends! Imagine that!). We'd all be happy, and the team would possibly be 7-0 (and ranked! oh noes!!!)

[HydroTech addendum: A few days after the game I see that not all Cal sports bloggers are in agreement on how well Riley performed. (See The Bear Will Not Quit explaining that "there is no reason why Riley shouldn't remain the starter if he practices and plays like this the rest of the way."); (Cf. Oski Talk explaining that "the killer part of the game was once again the poor play of the offense, including the QB, Kevin Riley."); (Cf. Bears With Fangs explaining that "Riley didn't set the field on fire ... and continued to misfire on a number of facets.").]

He had his mojo back. He had a swagger. I saw more energy, life, and confidence in his whole demeanor against today than I've ever seen from him before. Perhaps this whole "QB controversy" was the push he needed - sort of a wake-up call. The roles of Riley and Longshore are switched this year. Last year Longshore was the starter whose job was at risk. This year it's Riley who is the starter and job is at risk. Riley appears to be responding well to the possibility of him not starting.

Riley was "only" 11/22 today. But there were definitely some catchable balls which were dropped no matter whether they were dead on target or slightly off target. I think I can remember at least 3 which should have been caught regardless of the throw. Add 3 to 11 and you get 14. A completion percentage of 14/22 is just under two thirds and is good. Riley also had a solid 7.0 yards per attempt today.

After the ASU game, I was beginning to think that perhaps Riley hadn't been given the green light to do as many changes at the LOS as Longshore. But after seeing today's game, that notion appears incorrect.

The ability for the QB to change plays at the LOS gives the Cal offense diversity - diversity which was slightly lost in the Dunbar year. The QBs in the Dunbar offense had the ability to change the play at the LOS, but it didn't appear to be so built-in into the offense as it did with Tedford's offense last year, and what we seem to be seeing in Cignetti's offense this year.

Best and Vereen had a 6.8 yard and 7.1 yard average, respectively. Props has to be given to the big guys up front who opened up good holes for Best and Vereen after getting dominated last year. Even if you take away Best's longest run of the day, he was still averaging 5.0 yards a carry.

(3) Praise be to Tedford that Karl Dorrell snuck on the field as Kevin Craft.

Craft was actually sort of looking like an "okay" QB in the past three weeks. Today though, he looked pretty bad. I'm not even talking about the fact that he had four passes intercepted so much that many of his throws were way off target. In his defense, he had a ton of bad snaps which caused him to look down, throw off his timing, and causing him to take his eyes off of the defense. The guy is a competitor though and has a feisty character. Oh, and he is pretty good at throwing bad passes, so he does have that going for him. 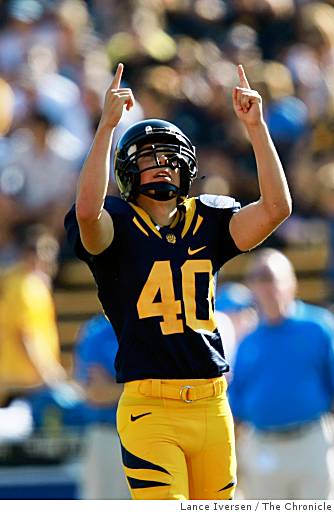 It seemed like the heat hit the fans hard half way through the 3rd quarter. I noticed the students seemed less willing to make noise. The alumni seemed pretty affected too. I felt like we were losing our "home field advantage" as the fans slowly melted and cooked in the sun. Am I the only one that noticed this? Or am I wrong?

Frat boy behind me in the student section: "Dude, I'm bored. We need to pass."

I mean, seriously, dude. Runs are sooo boring. Unless of course, they go for 25+ yards. How come Cignetti doesn't call more run plays that go for 25+ yards? I mean, he should be like doing that every time! Duh!!!

News flash for frat boy: Jeff Tedford offenses run more than pass. If you're bored by runs then you should consider transferring to Texas Tech. 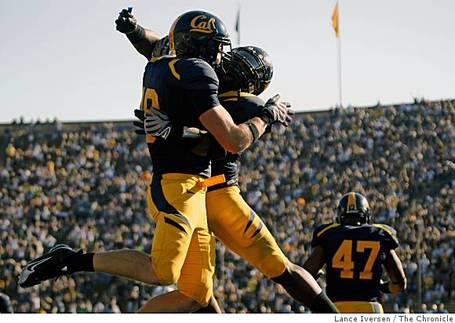 Today's offense really felt like vintage 2002 and 2003 Tedford. Lots of running, establishing the run, and throwing about 25 passes per game. There were even those few trick plays (reverse, and flea flicker) which brings back memories of Cal vs. Washington in 2002.

I think today's offense was really diverse too. It seemed open. It had variety. It had all this because the run was working. When the run is working, Cal doesn't have to be one dimensional. Cal has the choice to keep with the run - which was working - or throw in a different play. And if that other play doesn't work, we can still fall back on the run since it was working.

Gotta hand it to the defense. They showed up today and only gave up 13 offensive points. UCLA didn't have a first down until the 2nd quarter. Craft averaged a poor 5.8 yards per pass attempt. Excluding sack yardage, UCLA averaged around 1.5 yard per rush. Yeah... that's right. UCLA only had 16 yards of team total rushing yards. Ouch.

UCLA's Terrance Austin, who apparently gets up more for the game against Cal because Tedford & Co. didn't give him a scholarship, only had one reception for six yards. 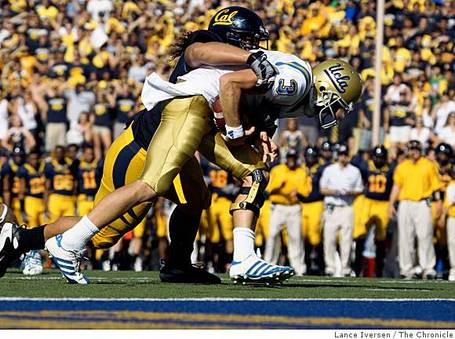 Second, the whole new "let's not cover the gunners" punt formation thing was puzzling. I'm surprised UCLA didn't try to exploit that earlier although perhaps they were waiting to draw us into a false sense of security. Did the Cal coaches think they wouldn't? I understand that the coaches were being cautious to prevent fakes up the middle but I'm not sure you can just waltz out there and completely ignore the gunners like they have hands of stone. Perhaps at least cover the gunners, then just before the snap, bring in the hawks for added protection in the middle.

I think an A- is in order. Riley's biggest mistake was almost throwing an INT, and getting a block in the back penalty. On the positive side, he threw strikes early and often.

Does yesterday's game conclusively prove that Riley should have been starting for Arizona State and Arizona? No. Riley definitely was in a slump and Longshore was worth a shot. I think we can all agree that Riley today was much different than Riley during WSU, CSU, and the first three quarters of Maryland.

Does yesterday's game conclusively prove that Riley should be the starter for the rest of the season? Probably, but only as long as he keeps up a level of play that is higher than Longshore and Riley gives Cal a better chance to win. If Riley keeps playing as well as he did today and against MSU, he'll be the starter for the rest of the year, hands down, no questions asked. But if there is a regression back to the lethargic slow starts and overthrow-athons that we saw earlier in the season... Tedford might give Longshore another go.

But Cal fans should be happy. We now know that Riley's Michigan State performance wasn't just a one-hit wonder. Now it's just a matter of getting this consistent play every single game.

If Riley can keep up this level of play on a consistent basis, the coaches won't have to think about flip-flopping with QBs, and Cal can stay right in the hunt for the Rose Bowl and "controlling one's destiny" rather than living on a prayer.

So it's come to my attention that the QB position is up for grabs... still. I honestly thought that with Riley's performance on Saturday, that he more or less had the inside track on the starting job until he hit another slump or he began missing too many easy throws.

Well, again, I'm not Coach. So I think I'll refrain from saying whether I think he's doing the right thing or not, but I will say that there is some logic to his madness.

Although it may be unsettling for us fans to not know who is starting each week, I suppose that is a logical reason for this unique approach. Let's trust in Tedford on these decisions. If Longshore should start next week, I don't think we should necessarily see it as a conclusive knock on Riley that he's not good enough, but perhaps that his attributes didn't quite suit the Oregon gameplan as well as Longshore's. The same applies should Riley start instead of Longshore.

So I guess Tedford's words are a warning to us fans. We might see different QBs from here on out through the rest of 2008. Simply put, which QB gets the start will hinge on which QB gives Cal the best chance to win via execution of the opponent-specific gameplan. 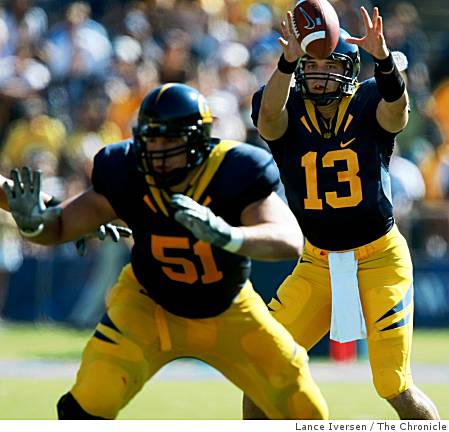