I've never tailgated at other schools much.  Except for tailgating at that Rodin Sculpture Garden in Stanford, most of my tailgating experiences have been in various parking lots at the Cal campus.  So, I figured saturday pre-game before the UCLA game would just be another pre-game tailgate at a pre-determined parking lot.

I don't want to know why he was in a banana suit.   I think he lost a bet.

All I know is that just plain blew my mind. 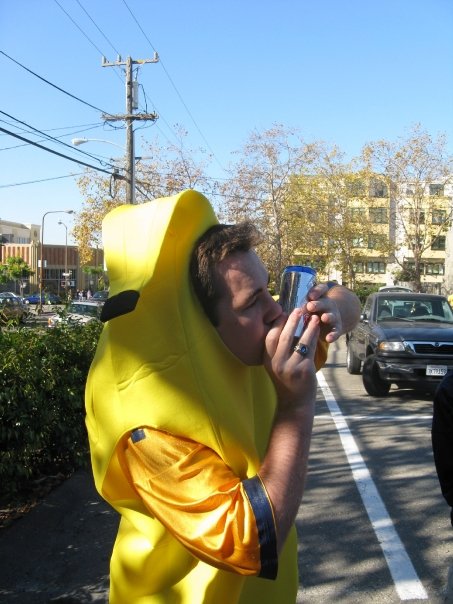 You can't tell, but he actually had his banana suit tucked into his basketball shorts.  That The Maharg, he so crazzy!

And let me tell you when it comes to two of The Maharg's greatest loves (shotgunning beers and littering), Saturday was a banner day for him: 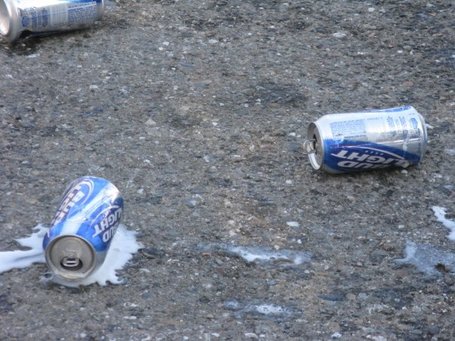 But there was more to Saturday morning than merely watching TuckNBananaSuit getting drunk in a parking lot.

There was 33SwisherSweet.  My boy, 33SS!  He had challenged me to a "passionate discussion on the state of Cal athletics" (aka fisticuffs!) the other day.  And he happened to be tailgating in the same parking lot as me.  CalBandGreat and I didn't know anything more about him than he may or may not like Nick Swisher.  Or cigars.

We even walked up to some random guy and asked if he knew Nick Swisher.  He said he knew OF Nick Swisher.  So, we were all "Ok, your story checks out.  But don't let it happen again!"

It was mostly fruitless, except I noticed one man swivel his head around quickly when we walked by yelling "SWISHER SWEET I'M COMING FOR YOU!"  I wasn't sure if he was 33SS or if he was just confused as to why 2 loons were randomly wandering yelling inane junk.

But I did notice that he was in our tailgate, so I kept my eye on him.  Tried to listen for things like "Hey, did you notice Nate Longshore only goes through one progression?"  or "I want to have Kevin Riley's child."  And there were a few anti-Longshore rumblings!  Interesting............

So, I tried walking by him one last time yelling "SWISHERSWEET!"  And lo, it was him!  CalBandGreat and I actually majored in sleuthing at Cal.  So, it worked out and CBG and I started to chat with 33SS.  33SS is a pretty chill dude and I was ready to have our "passionate discussion."  I thought it would go something like this:

Thanks to Yellow Fever for that video.  But, unfortunately, there was no Dance Of Joy performed that day.  No, instead, CBG hit me in the back with a folding chair, while the ref (The Maharg) wasn't looking!  With me down, 33SS and CBG started laying into me something fierce.

Then, CBG spray painted nWo on my back and posed victoriously atop me.  He was working with 33SS THE ENTIRE TIME!??!?!?  I should have probably figured that out when I saw Scott Hall hanging out with them beforehand.  I guess I'm too stupid!

Another one for the good guys.  Triple Le Sigh!

Of course, the problem with a 12:30 start time is that the tailgate starts so early, hamburgers and hot dogs aren't really on the menu. 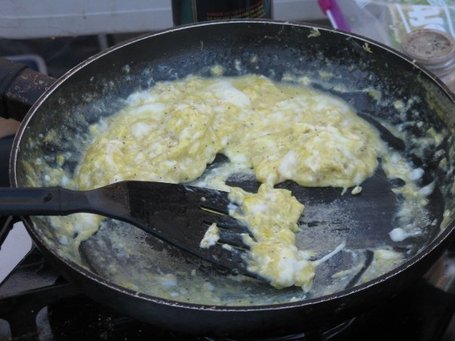 But that's not going to stop the drinking.  There's nothing more delightful than standing in a parking lot getting drunk at 9 AM on a Saturday morning.  Or so I would know if I were to drink.

But if there's one thing I know about getting drunk, it's that the mere act of drinking a liquid beverage is not satisfaction enough.  You apparently have you add rules and regulations to the process of getting totes faded. 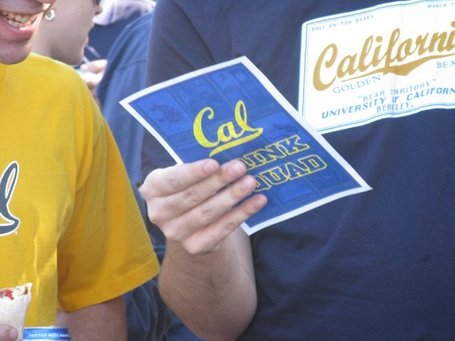 This is Loteria, a complex bingo drinking game.  People call out the names and if you get 3 across you can force somebody to drink.  If you get a blackout, I think everybody has to drink.  Here are two of the sheets. 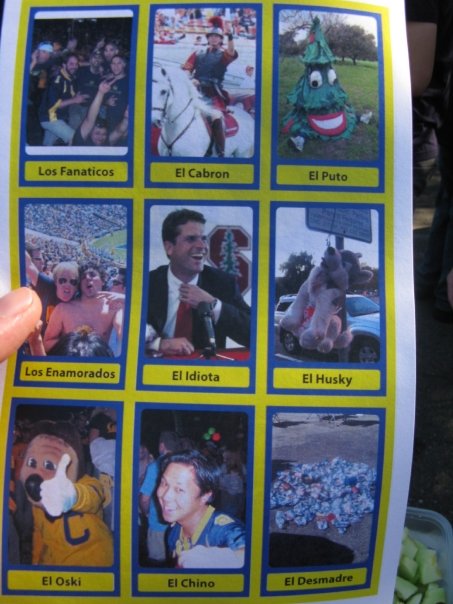 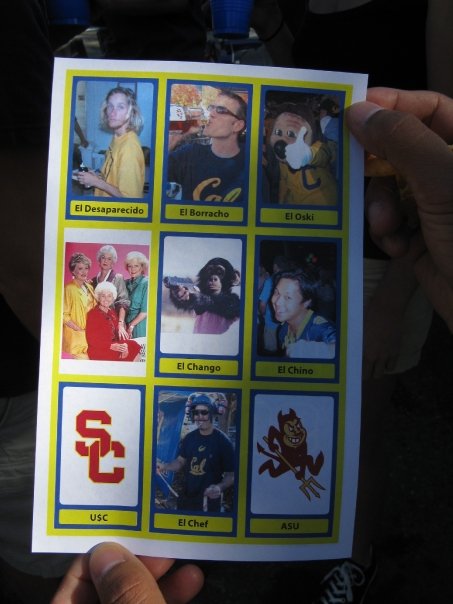 Note that the WSU square on the middle left there is screwed up slightly.  No name!  Ai!

While all this fun was taking place in the parking lots, the other various Cal pre-game events were taking place.

Bear's Lair was packed with people: 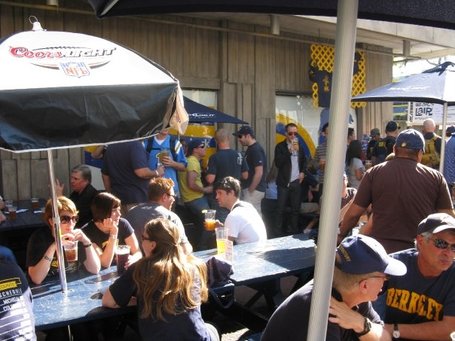 And the band was doing its thing out on Sproul: 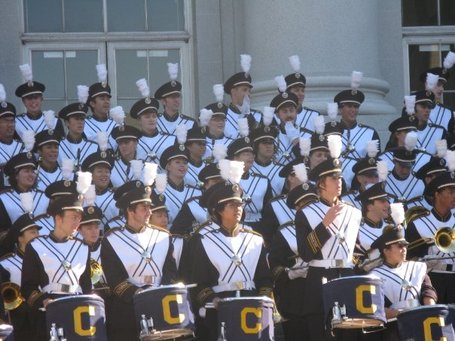 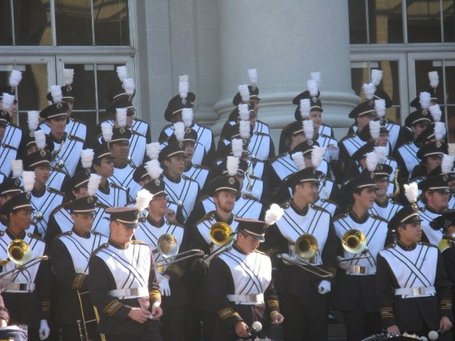 For people who have never been to Cal or a Cal game (I'm looking at you JShu-non-success), Cal isn't all some sort of modern industrial complex without sunlight, plants, or trees.  Although to be fair, with current tree-removal trends as they are, by 2020, it'll probably be that way.

But on campus there are lawns et al where one can have a picnic, more than a tailgate.  Faculty Glade is a series of lawns smack dab in the middle of the campus, where many people come to have a nice picnic.  You can't really bust out the stove, but it's still fun.  Let's say that this solitary man represents relaxing out on faculty glade. 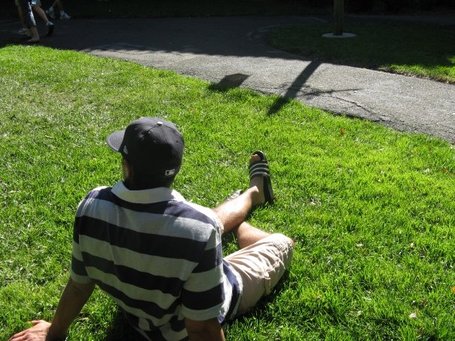 It usually doesn't get as crazzy or nWo-run inish on campus, but you can still have fun.  It's the kind of place you go to picnic when your parents are in town to enjoy the game and you want to sweep all the normal debauchery under the carpet.

In an unrelated story, CBKWit was out there with his parents and half a dozen CGB regulars like Zoo News, OskiWee, KittWin, and, of course, RemorsefulBruinBabe.  I thought without CBG and 33SS around, I could put all the ambushes behind me.

Boy was I wrong!  As soon as they found out that I was who I was, Mr. and Mrs. CBKWit laid into me AGAIN something fierce.  Not with their fists, but with their words.  They were upset about a comment I made in this Roundtable.  BTW, I love the comments in that thread.

Anyway, CBKWit's brother, a current student at WSU, had written out a long and delightfully enjoyable analysis about WSU for our readers, including this assuredly self-aware line:

If the Cougs finish anything less then 13-0, this Coug fan will view it as a disappointment.  But hey, at least Busch Light comes in 30 packs in Pullman.

I happened to say this:

TwistNHook:  Ok, ok, please stop, I give up.  They shouldn't waterboard people at Gitmo, anymore.  Just have CBKWit's Brother explain Cougar football.  The terrorists would capitulate in a second!

Quickly, an enjoyable afternoon picnic turned into a brutal assault upon my sensibilities by Mr. and Mrs. CBKWit.  And they did it the only way that parents know how.  THEY CALLED MY PARENTS?!?!

They told my parents that I was a bad influence on their son.  And that they didn't want me hanging out with their son.  And that I needed to be grounded.  My parents, being the hippies that they are, tried to explain that CBKWit was going to learn about that sort of thing anyway, even if it was in the schools, on the streets, or by a kindly old zookeeper (not to be confused with Zoo News, who is neither kindly nor old).

Needless to say, CBKWit is no longer allowed to associate with the blog anymore.  We'll really miss his 1 comment a week!  And to be fair, I'm not sure how much we'll miss that.  As soon as I got to the picnic, the first thing CBKWit said to me, in all seriousness, without any hint of irony was "I can't believe you went to see a play last Saturday night during the Arizona game.  Couldn't you go to see it at another time?"

Anyway, we were hoping to catch the marching band on its way up to the stadium, maybe even sneak in again with them.  But thanks to the 40 minute "parent conference" we missed them!  Boo!  I blame CBKWit's brother!

Luckily, a local friend was willing to re-enact part of the marching band walk up:

I, for one, can't really tell the difference between that and the band's usual march up.