Honestly, I wasn't very energized until the horrible flea flicker turned miraculous TD to Boateng and the prophet Mohamed's pick 6 in the fourth quarter.  Prior to that, we experienced the same herky-jerky game last witnessed (successfully) against ASU.  I felt a pair of series in the third quarter nicely encapsulated they alternating excitement and discouragement so prevalent throughout the game.  After Anger pinned the Bruins on the 10, Alualu came up with a sack on 1st down and we (AGAIN!!) came thisclose to a safety on a stuffed run.  On third down, the little bruins completed a short pass and we were ready to start our drive at the UCLA 40.  Our defense had done its job and then some, forcing UCLA backwards and almost coming up with the safety.  Then our offense took the field.

On first down, a holding penalty.  On first down again, a sack.  On second down, a decent QB draw...with another holding penalty.  2nd and 34(!) netted us a 12 yard screen pass and a high, almost intercepted pass that would have been short of the first anyway.  With a 1st and 10 on their 40 yard line, we went back 12 yards.

Clearly, this type of offensive effort is not going to win us road games at USC and OSU, and will make life pretty difficult at home against Oregon and Stanford.  Our offensive line continues to struggle with penalties and protection, our receivers continue to drop catchable balls, and our QBs continue to make slightly to very inaccurate throws.  I wasn't terribly optimistic about our offense coming into this year, but I thought they'd be ahead (through 7 games and two bye weeks) of where they are now. 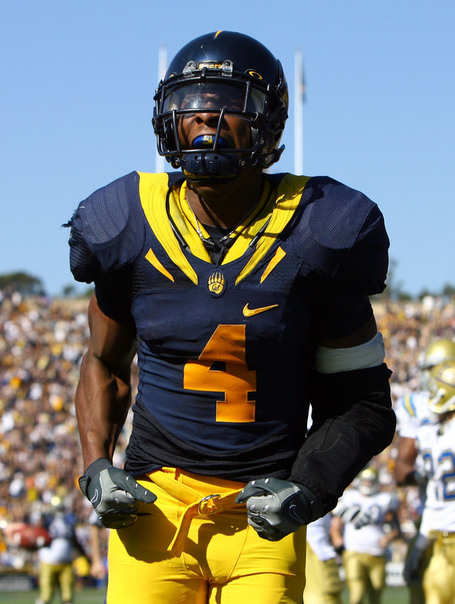 He's the most awesomest.

With that said, and with our offensive problems still a looming concern for our upcoming games, that was a fun fourth quarter.  You would think that STCPA (Special Teams Coach Pete Alamar) would have learned from the 10 men on the field fake punt debacle in the Rose Bowl in 2005, but there was a UCLA gunner standing all alone at the top of the field for a first down on 4th and 23...only the pass was lofted and behind, giving our defender the opportunity to make the tackle one yard short of the first down.  It was only a 7 point lead for Cal at that point, and a first down would have completely energized UCLA.  Instead, Cal took the ball, called a flea flicker which was almost blown up twice in the backfield, and staked an insurmountable 14 point lead on a great catch by B (Boateng).  And honestly, while the flea flicker was great, my favorite part of the bruin fake punt failure was the awesome bruin band.  As Cal fans are whooping it up and the ref is signaling a first down for Cal at midfield, the bruin band played on celebration, oblivious to what was going on around them.  That's my definition of relentlessly positive.

While the offense continues to struggle, how about that defense!  UCLA had 10? 20? rushing yards, but even more reflective than yardage of the run defense domination was UCLA's play calling.  Their first 4 plays from scrimmage?  All passes, including an interception, a sack (I believe), and 3 solid hits taken by their QB KC (Kevin Craft).  UCLA knew from the very beginning that their running game had no chance, and they were right.

And let's not forget, Let's NOT forget, our awesome pass coverage.  We knew KC (Kevin Craft) was a pretty mediocre QB playing behind a patchwork offensive line, but 4 interceptions is 4 interceptions.  Although, to be fair to KC (Kevin Craft), our secondary had a little help from one of the greatest supervillains known to man. 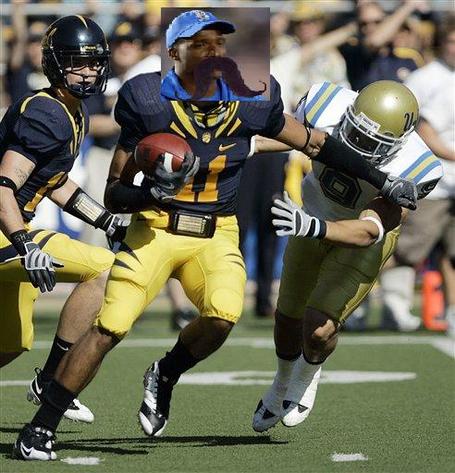 After MM's (Mike Mohamed) pick 6 put us up by 21, I thought Tedford would put on the breaks.  I expected to see Slocum running behind our second team O-line, but our starters returned and ran our offense, including a double reverse with a SWEEEEEEET hurdle by Jeremy Ross and a play action TD with about 2 minutes left. 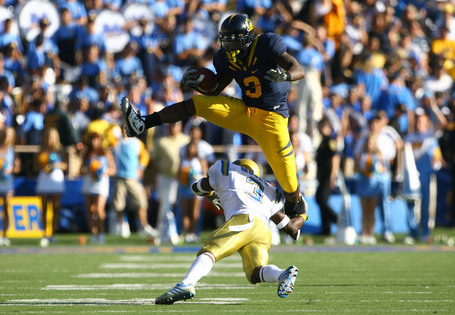 You could make a case that Cal was running up the score, and if I was calling the plays, I wouldn't have dialed up the play action to the tight end which we attempt quite frequently.  But I think CJT (Coach Jeff Tedford) has demonstrated on numerous occasions that's he's a stand up and honorable guy, and has never shown a propensity to run up the score (sometimes to his detriment: So Miss 2004).  I think the play calling here was more a product of the fact that our offense isn't very good right now, and we need all the game experience we can get.

As a very strange act of retaliation, CRN (Coach Rick Neuheisel) called 3 timeouts with 1 minute left on the clock and his team down 21, including the final timeout after Cal had gained a first down and could simply kneel the ball.  Here's ESPN's take on it:

"[N] (Neuheisel) curiously called timeouts after each of the Bears' three kneeldowns in the final seconds, forcing Cal to run a handful of running plays."

I think we know who was really behind this sinister plot. 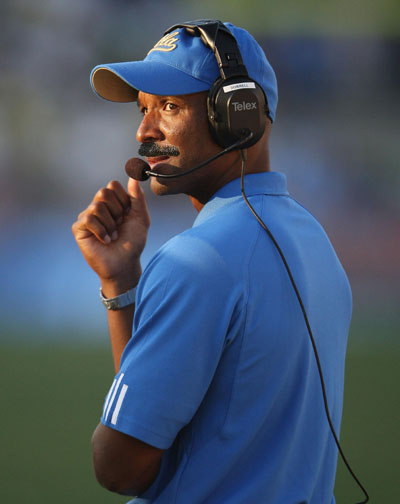 Maybe CRN was just trying to get his defense some more game reps, as CJT was with the offense.  Or maybe CRN was trying to maintain that relentless positivity we've heard so much about in the face of impending defeat.  In any case, CRN and CJT's decisions to play to the final gun made for an odd finish from what was a very predictable game: Cal's defense dominates while its offense struggles and makes just enough plays to pull out a (mostly) close game.  I'm very nervous for the upcoming Oregon game, but for now, lets just revel in our victory with our overflowing fervor troughs.