Well, Addicted To Quack is organizing this whole Pac10 Roundtable thing.  8 out of 10 of the Pac10 teams (Boo Stanford and Arizona!!) have blogs that get together to discuss the news of the day.

Rival smugglers working for the Hungarian mob invade the Mustache Of Karl Dorrell's house while he is away, raping his wife and holding his children hostage. When the Mustache Of Karl Dorrell arrives they kill one of the children to show him their resolve. They then threaten to kill his wife and remaining children if he does not surrender his business to them. Rather than give in to their demands he murders his loved ones and all but one of the Hungarians, whom he spares knowing that the survivor would tell the mafia what has transpired. The Mustache Of Karl Dorrell then goes after the mob, killing dozens of people, including the mobsters' families, friends, and even people who owe them money, as well as destroying their homes and businesses. He then goes "underground", never again doing business in person and remaining invisible even to his henchmen, who almost never know for whom they are working. 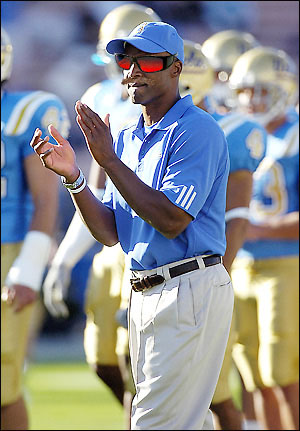 The Greatest Trick The Mustache Of Karl Dorrell Ever Pulled Was Convincing The World Karl Dorrell Has Vanished.

Behind the fold, find the questions.  And, to a much lesser extent, the answers.  We brought our heads together to bring you these bad boys, so I hope you enjoy them! Read our answers to Addicted To Quack's Pac10 Roundtable and share your favorite memory of the Mustache Of Karl Dorrell GO BEARS!

1.  While Arizona's victory over California certainly caught most of us by surprise, perhaps even more surprising was the 42-27 score.  With many of us thinking that Cal was the second best team in the conference, this result throws a huge twist into the Rose Bowl race.  Is Arizona really that good?
1a. Is Cal's defense really that terrible?

Well, you know, Cal is a good team.  And Arizona is a good team.  Good teams are the type of teams that win and home and lose on the road.  We aren't a great team like USC (who also did lose on the road).  So, going up against a quality team, a team averaging 40 points a game, a loss was certainly possible.  Wasn't the line a push?  In this down year for the Pac, Arizona is finally in the mix.  Perhaps saving Stoops job (again). So, I don't think there is as much shame in losing to Arizona as people think.  But nobody is better at generating shame than Cal.

Cal's D seems to be also affected by the road,home conundrum.  At home, we shut down ASU and MSU's superstud Javon Ringer.  On the road we let 3rd stringers and Maryland running backs run wild.  This is why fans don't have high hopes for the USC or OSU game.  Luckily for Cal 4 of their next 6 games are at home.

That schedule puts Cal in a solid position to end 6-3 in the Pac10.  If Cal ends 6-3, a Sun Bowl or Holiday Bowl seems likely.  But with the problems on offense, the D will be the key to this team.  For some reason against Arizona, it was execution.  We'd stuff the guy at the line of scrimmage, but fail to execute the tackle and it would be shed.  If Cal is going to go somewhere good this year, the execution needs to be top notch.  There is not a large margin for error in college football.

2.  USC's 69-0 beatdown over Washington State rates among the worst losses in the history of the sport.  The Cougars had a total of four first downs, three turnovers, and 28 passing yards.  If there are any Washington State fans left out there, what do you say to calm their existential crisis at this point?

It's bad right now, but it won't always be bad.  In fact, though Washington State isn't one of the historical elite in college football, it's by no means hopeless.  Why, just 6 years ago, the Cougars were playing in the Rose Bowl, something Cal fans have been dreaming about for a solid half-century (which is still only half as long as Cubs fans have been waiting for their big payoff).  Historically, the Cougs aren't great, but they aren't awful, either; their all-time record of 415-448-38 isn't far short of .500, and it's not even the worst in the Pac-10 (that dubious distinction goes to Oregon State, owners of a 409-486-36 record.  Heck, just look at Wake Forest, owners of one of D 1-A's worst records (388-577-31):  despite their historically bad performance, they've more recently been associated with national rankings and BCS bowls.  Heck, even Northwestern, owners of the most losses in D 1-A history, are currently nationally ranked.
So yeah, this year sucks for the Cougs.  Week after week of absolutely putrid football awaits you.  But as someone who personally attended 10 of the 11 games in Cal's 2001 1-10 campaign, I can only counsel you to accept it, and even revel in it.  Go ahead, set the record for worst football team in Pac-10 history.  Bring a sense of humor along, and look for the small victories amongst the flaming rubble of defeat.  Then, when you're back on top, you can attest to how you were a fan "way back when we were a national laughingstock" and how "you young whippersnappers don't understand how far we've come, or how to really appreciate the success we've had."
Things will get better in the Palouse.  Because they can't possibly get any worse, can they?

3.  Oregon State is at it again.  Despite being the butt of jokes at the beginning of the year, the Beavers now look to be rolling and headed toward another top three finish.  Are the Beavers primed for another late season run, or were victories over the Washington schools just smoke and mirrors?

Well, certainly, victories over Tweedle Dee and Tweedle Dum up north doesn't show us a lot.  And they did get absolutely slaughtered by Penn State.  And they lost to Stanford.

But they did beat USC and nearly knocked off Utah.  The key to all this is that most of their embarrassing losses occured on the road, while their signature victory took place at home.  Like most good to great Pac10 teams, OSU is a different team at home.  Their speedy RBs are better able to hide behind that big OLine.  And their D, which replaced their entire front seven, seems to play a lot stronger.  Well, considering what happened in Happy Valley, it couldn't play much worse on the road.
They have 3 home games and 2 road games.  Let's say they win all 3 home games, which seems moderately likely.  Let's give them UCLA on the road and say that Arizona defeats them.  That puts them at 7-2 in the conference.  Uh, not too shabby.  And depending on how USC does, potentially in the Rose Bowl.  They do have the tie breaker with USC.
OSU has really been flying under the radar the past few years.  Amazing defenses have pushed them to success equal to Cal (if not more).  Things are certainly up in the air, but right now OSU is sort of holding all the cards in the Pac10, even if nobody realizes it.

4.  Stanford's bowl dreams just took a major hit when they laid an egg at the Rose Bowl.  While Stanford is 4-4 at this point, Washington State looms as their only easy game, and they still must play at Oregon, at home versus an SC team that will be looking for revenge, and the Big Game in Strawberry Canyon.  Given the brutal schedule, is it too early to bugle 'TAPS' on their bowl chances?


I don't think it's too early to play Taps on Stanfurd's bowl chances.  Let's give Stanfurd one W for playing WSU, but the games against Cal and Oregon are winnable albeit unlikely.  As for winning against USC, that's even more unlikely.  If Stanfurd split the remaining 4 games, and went 2-2, they'd be bowl eligible and with 6 wins.  I think Stanfurd has a chance to reach 6 wins with a guaranteed win over WSU and a good possibility of a win against Cal.

5.  At this stage in the game, USC is Barack Obama, and the field is John McCain.  Make the best case that you can for SC not winning yet another conference crown.

Arizona or OSU have the inside track here.  Arizona, because they are probably the best remaining team to face USC.  And OSU, bc they hold the tiebreaker with USC.  Oregon already lost to USC and Cal will lose to them in a few weeks.  Honestly, I don't see USC losing again.  Which means only OSU can beat them out.

Arizona hosts USC this weekend.  They seem as likely as any other team to take care of business.  We've seen up close that they have a high octane offense and a solid to good defense.  That Arizona RB who killed us is kind of a speedster guy like the Rodgers kid up at OSU.  Even if Arizona wins, it seems like OSU will probably make the Rose Bowl.

But still, the Pac10 is screwy this year.  Anything can happen.  Half a dozen teams can say that their have a reasonable chance at making the Rose Bowl.  Yea, USC has looked good going up against a few teams at home and taking on a weak WSU on the road.  And they'll probably crush UDub.  But I don't think this is your Leinart-Bush USC team anymore.  They definitely have weaknesses and there is a chance another team exploits them.