Look, people, there is a 3rd choice here.  A 3rd party candidate, who has the mobility of Riley with the decision making prowess of Longshore.  And I ain't talking about Joe The Plumber.

I'm talking about the one, the only, STEGOSAURUS! 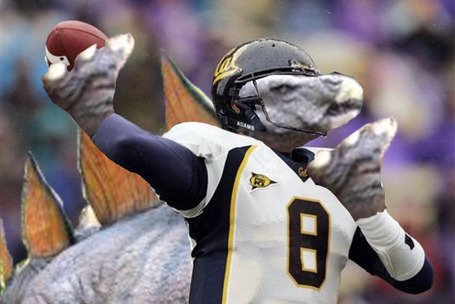 Thanks to Zoo News for the photo.

Stegosaurus CAN take us to the promised land.  He can take us to the Rose Bowl.  I say, let's call upon Tedford to forget Longshore, forget Riley, forget Joe The Plumber and his howitzer-esque rocket arm, and choose Stegosaurus to lead this team!

BERKELEY - With new head coach Mike Montgomery on board and Cal basketball celebrating its 100th season, the Golden Bears will have their first official workout session of the 2008-09 campaign this Friday, Oct. 17 at Haas Pavilion.

One of the most successful collegiate coaches in the game, Montgomery looks to add to his legacy as director of the Cal program. In a combined 26 seasons leading Montana and Stanford, he has produced a 547-244 record (.691), tying for 12th-most victories among active Division I coaches.

Montgomery inherits a Cal team that returns two starters, junior guards Patrick Christopher and Jerome Randle, from a team that posted a 17-16 overall record in 2007-08, reaching the second round of the National Invitation Tournament. 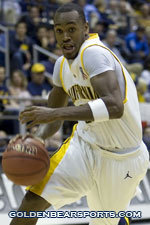 The 2008-09 California women's golf team looks to capture another tournament victory as the Golden Bears hop across the bay to compete in the 2008 Stanford Intercollegiate Friday-Sunday, Oct. 17-19, at the Stanford University Golf Course in Stanford Calif.

The Stanford University Golf Course is a 6,117-yard, par-71 course designed by William Bell and George C. Thomas, Jr. The 54-hole tournament will include one round of 18 holes played each day. Teams will tee off at 8:30 a.m. on Friday and Saturday, and a 7:30 start time is set for Sunday.

Swimming to take on Tejas!

On the Pool Deck
Fresh off its season opening victory at Pacific last Saturday, the California women’s swimming team returns to action this weekend, facing stiff competition against the Texas Longhorns in the home opener on Saturday, Oct. 18 at 12 p.m.

Okanes has a LOT of stuff:

There was another troubling sight on the field — defensive end Tyson Alualu walking around with the help of one crutch. But Tedford said after practice that Alualu has a leg infection that is being treated with antibiotices, and he expects Alualu to play Saturday. Tedford said Alualu had a fever Tuesday and experienced swelling in his leg.

It appears wide receiver Michael Calvin could be out for awhile after suffering what looked like a potentially serious knee injury during practice tonight. Calvin was running a route his knee gave out as he planted his foot. He crumbled to the turf and was in some serious pain. After being attended to on the field for a few minutes by the training staff, he was helped gingerly to the sideline. It didn’t appear Calvin could put any weight whatsoever on his leg.

Also, it appears kicker David Seawright won’t play Saturday at Arizona after suffering a strained groin Tuesday at practice. Tedford called Seawright “doubtful.” Giorgio Tavecchio practiced field goals Wednesday and Tedford said both he and Jordan Kay are in the mix to replace Seawright against the Wildcats.

Tedford all but said tailback Jahvid Best will play Saturday. Best practiced in full capacity for the second straight day and appears ready to return after a one-game absence due to a dislocated left elbow.

“I believe he will play,” Tedford said. “We put him through a lot of drills to test it. I think he’s feeling better and more comfortable.”

Tedford said Best wouldn’t be limited but did say he didn’t expect Best to return kicks, at least not at the outset. Best leads the country in all-purpose yards (215.5 ypg).

Article on JJ for the Cards:

Arrington, meanwhile, has joined a running back rotation that includes Edgerrin James and Tim Hightower. James and Hightower play on most standard run downs, with Hightower handling short-yardage and goal-line situations.

Arrington has been the specialist of the group, with coaches designing to plays to take advantage of his quickness and speed.

"He may not be a guy you hand the ball to 20 times a game," Warner said, "but he's a guy you make sure you get it to him 10 times a game, in different ways. It gives us an added dimension that we don't have with any of the other backs."

Remember, vote Stegosaurus in 08!  And dump away!