Well, Addicted To Quack is organizing this whole Pac10 Roundtable thing.  8 out of 10 of the Pac10 teams (Boo Stanford and Arizona!!) have blogs that get together to discuss the news of the day.

And this week, Addicted To Quack had nobody to host it for them.  So, they came to us and said "Look, California Golden Blogs, we need your help on this.  I know it is the day of your daughter's wedding, but nobody else can help us with this.  And might I say what lovely cheekbones you have."

To which we replied:

"We understand, AddictedToQuack. You found paradise in Eugene. You had a good blog, made no money, JShufelt protected you and there were those annoying duck calls and you didn't need friends like us. But, now you come to us and you say "California Golden Blogs, give me justice." But you don't ask with respect. You don't offer friendship. You don't even think to call us TwistNHook And Four Other Unimportant People. Instead, you come into our home on the day our daughter's to be married and you ask us to do murder for money.  Well, we can't do that, even if it is Pete Carroll!  But we will host that Pac10 Roundtable for you.  Hope that's OK." 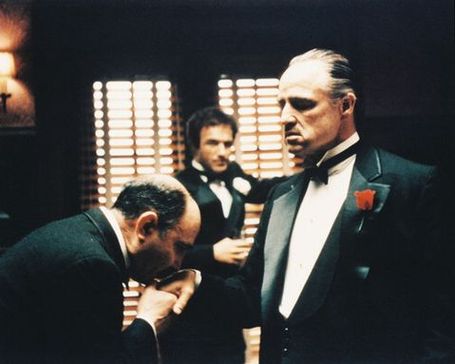 "Yes, we will host your roundtable, even though you never invited us over for a cup of coffee and our wife is your daughter's godmother." via basetta.pupazzo.org

So, there we go.  Everything is under control!  The California Golden Blogs have it!  Now, please, hand us those orange slices.  Nothing bad can come of this.

Behind the fold, find the questions.  And, to a much lesser extent, the answers.  We brought our heads together to bring you these bad boys, so I hope you enjoy them!  GO BEARS!

Of course its possible.  We live in the age of parity.  Half the frigging Top 10 just lost this past week.  All a team has to do is win, win, win to make it to the National Championship race.  Last year, we were close to handing the National Championship game to West Virginia and (I think it was) Kansas.  West Virginia and Kansas.  All you have to do is win.  If you lose, lose early.  USC did just that.  Now, the top 2 teams are Texas and Alabama.  Both have brutal schedules coming up with fearsome opponents both at home and on the road.  It seems highly doubtful both will run the table.  And if they do, they both deserve to go to the Title Game.

USC just has to make hay with the weakened Pac10.  They've already faced Oregon and ASU, two of the (in theory) tougher teams they face.  They lost to OSU, another solid team, but, as previously noted, that loss is so early it might not hurt them in the long run.  They have Wazzu this weekend, they might have to invent new numbers to keep track of all the points USC scores there.  Now, there is Cal.  But it is in LA, so that doesn't give us a lot of hope for the upset.  We'll see.

But I have a feeling that USC will roar through a weak Pac10, while other teams like Alabama and Texas get tripped up by a difficult SEC/BigXII.

2. The season is 7 weeks old, nearly half over.  What's the biggest surprise in the Pac-10 so far this year?

I think that award has to go to Arizona State.  How many of us thought they'd be riding a 4 game losing streak at this point with 2 rough losses in the Pac10?  Their offense consists mostly of Rudy Carpenter running for his life, because they have a bad OLine and an even worse running game.  Their defense is not half bad, but has to shoulder too much of the load.  And their kicking game is disastrous (missing kicks left and right against USC).  I think most people figured, at worst, ASU would be the 4th best team in the Pac10 this year.  Now, it looks less and less likely that they will be able to make it to just that point.  There's a lot of season left, but most people expected USC to be good and Wazzu and Co. to be bad.  But for ASU to be this bad?  Not expected.

3. After dispensing with Oregon and Arizona State, USC seems to have righted itself back onto the path towards another Pac-10 championship.  Obviously everyone's looking to Cal as the last serious challenge, while no one expects this weekend's trip to Wazzu to be anything but ugly, but 3 potentially tricky road trips remain:  Arizona, Stanford, and UCLA.  Where are the Trojans most likely to be tripped up?

Even though the Wildcats lost at Stanford last weekend, I still think Arizona will be the most dangerous road trip remaining for the Trojans.  USC won't overlook Stanford again this year, and while UCLA might have some emotion on its side (what with Neuheisal's declaration of the 'end of the monopoly'), it's hard to imagine USC letting their guard down in the Battle of Los Angeles either.  Usually, when they've been tripped up, it's by opponents that they've overlooked, and USC could be caught looking ahead to home dates with Cal and Notre Dame in November.  It's also worth noting that Arizona has a history of major upsets at home under Mike Stoops.  A talented senior quarterback (Tuitama) and a tough defense will take advantage of the sorts of mistakes that Arizona State was unable to last weekend.
Personally, I still think 'SC has another loss in them somewhere down the line, and Arizona might just be the team to pull it off.

4.  Although it's still too early to make bowl predictions with any sort of accuracy, it seems at this point in the season that the Pac-10 is unlikely to fill its 7 contractual bowl slots.  How many Pac-10 teams do you think will eventually become bowl eligible?

At this point, I think we can pretty safely pencil in USC, Cal, and Oregon as bowl teams; Oregon's got 5 wins, and Cal's got 4, with games remaining against Arizona, UCLA, Stanford and Washington.  Even if they can't beat Oregon or USC, they've *gotta* be able to win 2 out of those 4 games, right?
...right?
Anyway, on the flip side, neither of the Washington schools are going bowling.  I know I'm going out on a limb here, but I'm calling it now.  That leaves 5 teams in the middle:  Arizona, Arizona State, Oregon State, Stanford, and UCLA.
Stanford gets there if they can beat UCLA this weekend, as they have 4 wins and a date with Wazzu coming up.  Lose to the Bruins, and they need to upset either Oregon, USC, or Cal.
Arizona also has 4 wins already, and besides the gimmie vs. Washington State left, they have dates with Cal, USC, Oregon, Oregon State, and Arizona State.  Tough, but I have to believe they get at least one of those games are go bowling.
Oregon State only has 3 wins so far, but they typically close strong.  They've already upset USC, and the remaining schedule isnt *that* daunting, including this weekend's trip to UW.  I think the Beavs are bowling too.
Arizona State and UCLA are both just 2-4.  ASU's got an easier schedule, having already played USC and Cal, but I just don't see it for either team.  If it did happen, it would almost certainly be at the expense of one of the marginal teams above (Stanford, Arizona and Oregon State).
So, I'm guessing 6 Pac-10 teams reach the magical 6-win plateau, leaving the Poinsettia Bowl without a Pac-10 team.  Oh well, who wants to vacation in San Diego in December anyway?

5.  Arizona State has obviously been a massive disappointment so far this year.  Dennis Erickson has never been one to stay in a "rebuilding situation."  How long do you anticipate Erickson staying for and what can be done for next year to rebound from the disaster that is 08?