So last week against ASU I saw something which caught my eye.  In the past 4 years or so that I've really started to study and analyze the Cal offense I saw the QB do something I've never seen them do before.  I saw a Cal QB create-a-play at the line of scrimmage.

You see, I've said many times before, Cal QBs cannot do their best Peyton Manning impressions (meaning they call any play they want at the LOS or create-a-play at the LOS).  QBs in the Cal offense are allowed to change the direction of runs, allowed to choose between the run or pass play on option plays (where the offense goes to the LOS with two plays in mind), and is allowed to audible to pre-selected plays which are packaged jointly with the personnel and formation on the field.

But on Saturday against ASU, I am pretty sure we witnessed Longshore doing a Peyton Manning-esque create-a-play at the LOS.

Let's have a look. 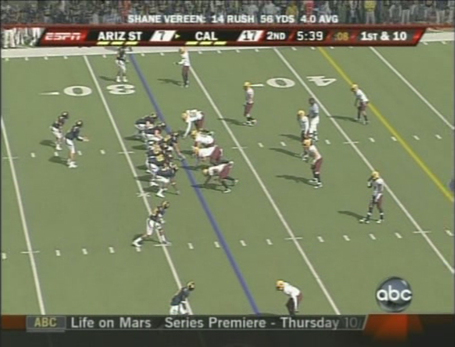 Above is the pre-snap look.  Cal has 11 personnel on the field (3 WRs, 1 TE, 1 RB).  Longshore is in shotgun with twin WRs to the open side of the field along with the TE ("open side" = the side of the offense with more field).

dballisloose asked a very good question in the comments:

Why do you always start off by saying “Cal has 11 personnel on the field”? How many did you expect them to have? I say, if there are 10 or 12, go ahead and mention it ;-)

I’m sorry, I guess I haven’t explained this before, but when I say “11 personnel” I don’t mean 11 people on the field.

Personnel packages are given numbers which correspond to how many RBs, TEs, or WRs, are on the field.

When Cal is on defense, you can see the coaching assistant on the east sideline put up a yellow card with such numbers alerting the defensive players on the field of the offensive substitutions and what offensive personnel package the offense has on the field.] 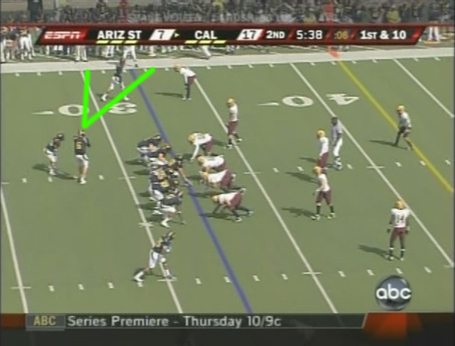 But Longshore sees something in the defense.  Longshore looks to his left and gives a signal to the SE WR (split end wide receiver).  I've shown Longshore looking at the WR with the green vision cone. 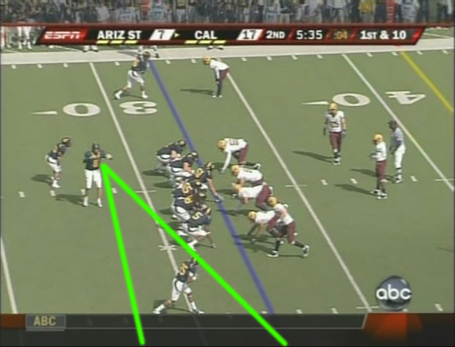 Longshore then looks to his right and gives another signal to the twin FL (flanker) WRs to the offense's right.  I've shown Longshore looking right and signaling with the green vision cone. 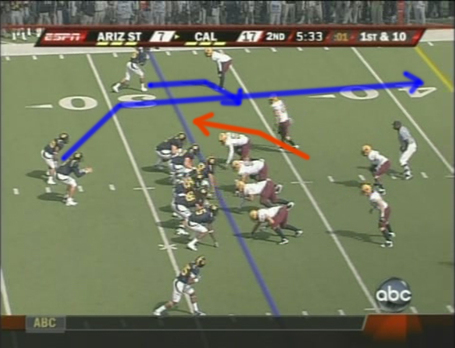 Above is the pre-snap look just before the snap.  I've shown the routes of the SE WR and the RB with blue lines.  The SE WR runs a quick in, and the RB runs a replace route [edit: correct name for the RB route is a "replace" route and not an outside sluggo].

The two Cal FL WRs off the bottom of the screen are running comebacks. 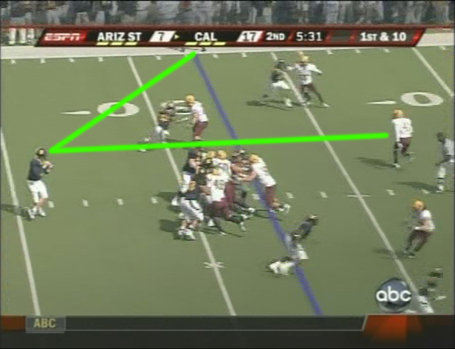 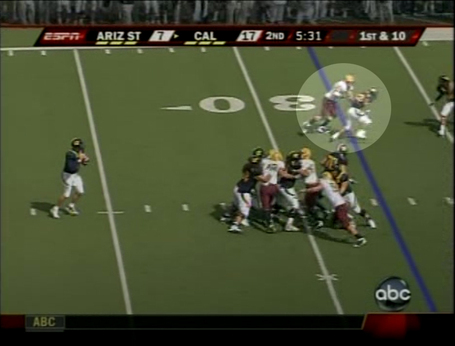 Longshore gives one last look to his left to see if Vereen could beat the jam and the ASU WLB.  I've circled Vereen and the ASU WLB.  Note the SE WR just off the screen.  Had the ASU WLB been where Longshore thought the LB would normally be, the WLB probably would have been picked by the SE WR and Vereen would be wide open down the sidelines. 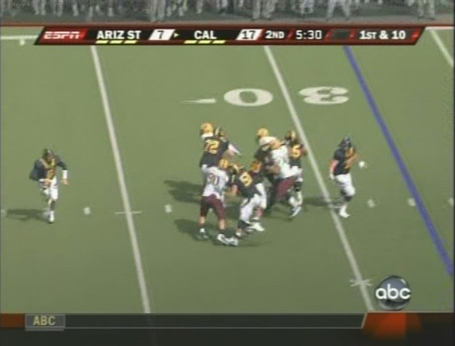 But Vereen wasn't open so Longshore scrambles to his right, going through his progressions, and looking to his other options.  Longshore even directs traffic by pointing to where he wants his FL WRs to go. 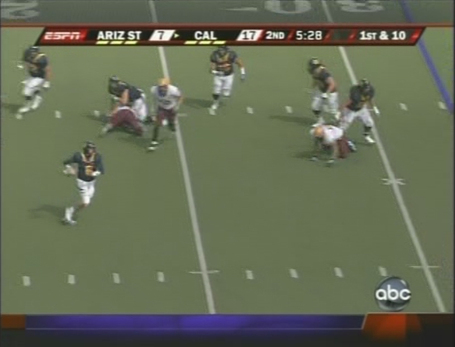 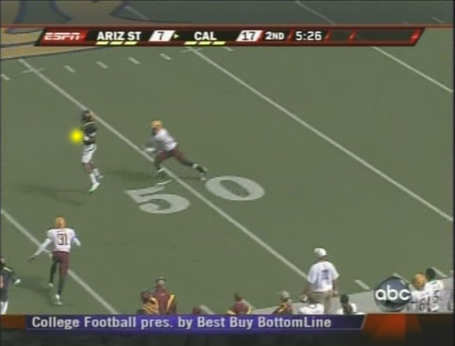 And it's caught by Boateng.

So how am I pretty sure that this was a create-a-play rather than an option play, or a pre-selected package play?

I've never seen any Cal QB do what Longshore did.  I wasn't following the 2004 Cal offense as closely as I do now so I can't really say if Rodgers did this or not, but I'm pretty sure he never did.  In my opinion, aside from Rodgers, no other Cal QB has been so "on the same page" as Tedford than Longshore.  So it really doesn't come as any surprise to me that the first Cal QB to completely make his own play at the LOS would be Longshore.

So what are we to make of the fact that Longshore did a create-a-play Peyton Manning like-impression at the LOS?

It must mean that he's been given the approval by Tedford and Cignetti.  And if he's been given the approval to do so, he must have the requisite knowledge of the offense and defenses - or even more than the requisite knowledge.  Longshore might have the "expert" level of knowledge.  It shouldn't be surprising that Longshore has such a high level of knowledge considering he is in his 5th year, and has about 24 games worth of starter experience.

It will be interesting to see how much more of this we see in the future by Longshore and other Cal QBs.